Here, num specifies the number of positions to left-shift the value in value i.e., the << simply moves all of the bits in the specified value to the left by the number of bit positions specified by num. For each shift left, the high-order bit is simply shifted out (and lost), and a zero is brought in on the right. This means, when a left shift is applied to an int operand, bits are lost once they are shifted past bit position 31. If the operand is a long, bits are lost after bit position 63.

Java's automatic type promotions produce unexpected results when you are shifting the byte and short values.

As you know, byte and short values are promoted to int when an expression is evaluated.

Moreover, the result of such expression is also an int. This means that the outcome of a left shift on byte or short value will simply be an int, and the bits shifted left will not be lost until they shift past bit position 31.

For example, if you left-shift a byte value, that value will first be promoted to an int and then shifted. It means that you must discard top three bytes of the result when what you want is the result of a shifted byte value. The simplest way to do this is to cast the result back into a byte.

Here this program illustrates the concept of the left shift operator :

When the above Java Program is compile and executed, it will produce the following output:

Since each left shift gives the effect of doubling the original value, programmers frequently uses this fact as an efficient option to multiplying by 2. But you need to watch out. That is, If you shift a 1 bit into the high-order position (bit 31 or 63), the value will become negative. Here this program illustrates this: 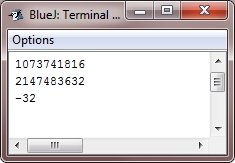 The starting value was carefully chosen because after being shifted left, 4 bit positions, it would produce the value -32. As you can see, when a 1 bit is shifted in bit 31, the number is interpreted as negative.