Java provides several bitwise operators that can be applied to the integer types: long, int, short, char, and long. These operators act upon the individual bits of their operands.

The Java Bitwise Operators are summarized here in this table :

Since, bitwise operators manipulate the bits within an integer, it is important to understand, what effects such manipulations might have on a value. Specifically, it is useful to know, how Java stores integer values and how it represents negative numbers. So, before proceeding, let's briefly review these two topics.

The reason that Java (and most other computer languages) uses two's complement is easy to see when you consider the issue of zero crossing. Assuming a byte value, zero (0) is represented by 00000000. In one's complement, simply inverting all of the bits creates 11111111, that creates negative zero. The trouble is that negative zero is invalid in integer maths. This problem is solved by using the two's complement to represent the negative values. When using the two's complement, 1 is added to the complement, which producing 100000000. This produces a 1 bit too far to the left to fit back into the byte value, resulting in desired behavior, where -0 is the same as 0, and 11111111 is the encoding for -1. Although we used a byte value in the previous example, the same basic principle applies to all of Java's integer types.

Because Java uses two's complement to store the negative numbers, and because all integers are signed values in Java, applying the bitwise operators can easily produce an unexpected results. For example, turning on the high-order bit will cause the resulting value to be interpreted as negative number, whether this is what you intended or not. To avoid unpleasant surprises, just remember that high-order bit determines the sign of an integer, no matter how that high-order bit gets set.

Here this table shows the outcome of each operation. In the discussion that follows, always keep in mind that the bitwise operators are applied to each individual bit within each operand.

The Bitwise NOT Operator

For example, the number 42, which has this bit pattern:

after the NOT operator is applied.

The Bitwise AND Operator

The bitwise AND operator, &, produces a 1 bit if both the operands are also 1. A zero is produced in all the other cases.

Following is an example that demonstrates the bitwise AND operator:

The Bitwise OR Operator

The bitwise OR operator, |, combines bits such that if either of the bits in the operands is 1, then the resultant bit is 1.

Following is an example that demonstrates the bitwise OR operator:

The bitwise XOR operator, ^, combines bits such that if exactly one operand is 1, then the result is 1. Otherwise, the result is zero.

The following example shows the effect of the bitwise XOR (^) operator. This example also demonstrates a useful attribute of a XOR operation. Notice here, how the bit pattern of 42 is inverted wherever the second operand has a 1 bit. Wherever the second operand has 0 bit, the first operand is unchanged. You will find this property useful when performing some types of bit manipulations. 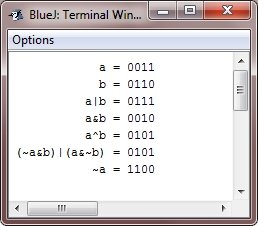