The String is probably the most commonly used class in Java's class library. The reason for this is that strings are a very important part of programming.

The first thing to understand about strings is that every string you create is actually an object of the type String. Even string constants are actually the String objects. For example, in the following statement

The second thing to understand about strings is that objects of the type String are immutable, once a String object is created, its contents cannot be altered. While this may seem like a serious restriction, it is not, for the following two reasons :

In Java, String can be constructed in a variety of ways. The easiest way is to use a statement like this :

Once you have created a String object, you can use it anywhere that a string is allowed. For example, the following statement displays myStr :

Java defines one operator for the String objects: +. It is used to concatenate two strings. For example, the following statement

The following Java program demonstrates the preceding concepts of Strings : 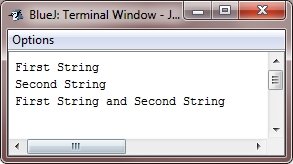