Inheritance is one of the base of object-oriented programming because it allows the creation of hierarchical classifications.

With inheritance, you can create a general class that defines traits common to the set of related items. This class can then be inherited by the other, more specific classes, each adding those things that are unique to it.

In nomenclature of Java, a class which is inherited is known as a superlcass. The class that does the inheriting is called a subclass. Thus, a subclass is a specialized version of a superclass. It inherits all of the members defined by the superclass and then adds its own, unique elements.

To inherit a class, you incorporate the definition of one class into another by using the keyword extends. To see how, let's take a look at the following short example. Here this program creates a superclass named A and a subclass named B. Notice here that how the extends keyword is used to create a subclass of A. 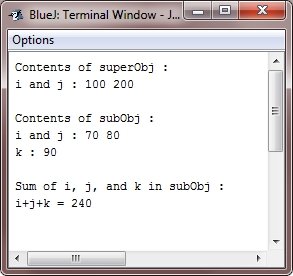 As you can see that the subclass B includes all of the members of its superclass, A. This is why subObj can access i and j and call the showij() method. Also, inside sum(), i and j can be referred to directly, as if they were part of B.

Here is the general form of class declaration which inherits a superclass :