So far, all of the variables used have been declared at the start of main() method. However, Java allows the variables to be declared within any block.

A block is begin with an opening curly brace and ended by a closing curly brace. A block defines a scope. Thus, each time you start a new block, you are creating a new scope. A scope determines what objects are visible to the other parts of your program. It also determines the lifetime of those objects.

Many other computer languages defines two general categories of scopes: global and local. However, these traditional scopes do not fit well with Java's strict, object-oriented model. While it is possible to create what amounts to being a global scope, it is far by the exception, not the rule.

The scope defined by a method begins with its opening curly brace. However, if that method has parameters, they too are included within the method's scope.

As a general rule, variables declared inside a scope are not visible/accessible to the code that is defined outside the scope. Thus, when you declare a variable within a scope, you are localizing that variable and protecting it from an unauthorized access and/or modification. Indeed, the scope rules provide the foundation for encapsulation.

To understand the effect of nested scopes, consider the following program: 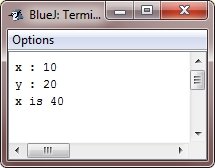 As the comments indicate, the variable x is declared at the start of the main()'s scope and is accessible to all subsequent code within the main(). Within the if block, y is declared. Since a block defines a scope, y is only visible to other code within its block. This is why outside of its block, the line y = 100; is commented out. If you remove the leading comment symbol i.e., //, a compile-time error will occur, because y is not visible outside of its block. Within the if block, x can be used because code within a block (i.e., a nested scope) has access to the variables declared by an enclosing scope.

Within a block, variables can be declared at any point, but are valid only after they are declared. Thus, if you define a variable at the start of a method, it is available to all of the code within that method. Conversely, if you declare a variable at the end of a block, it is effectively useless, because no code will have access to it. For example, the following code fragment is invalid because count cannot be used prior to its declaration :

Here is another important point to remember i.e., the variables are created when their scope is entered, and destroyed when their scope is left. This means that a variable will not hold its value once it has gone out of the scope. Therefore, the variables declared within a method will not hold their values between calls to that method. Also, a variable declared within a block will lose its value when the block is left. Thus, the lifetime of a variable is confined to its scope.

If a variable declaration includes an initializer, then that variable will be reinitialized each time the block in which it is declared is entered. For example, consider the following program : 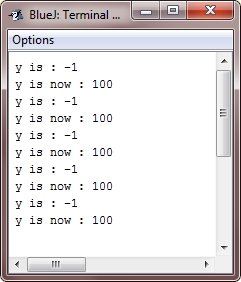 As you can see, y is reinitialized to -1 each time the inner for loop is entered. Even though it is subsequently assigned the value 100, this value is lost.