Beginning with the JDK 5, there are two forms of the for loop. The first is the traditional form that has been in use since the original version of Java. And the second is the newer "for-each" (you will learn about this loop in detail in other chapter) form.

We will discuss both types of the for loop one by one, i.e., one in this chapter and the newer one in the next chapter.

Following is the general form of the traditional for statement :

If only one statement is being repeated, then there is no need for the curly braces. But you can use curly braces (since it makes easier to add some other statements later).

Following is a version of the "tick" program that uses a for loop : 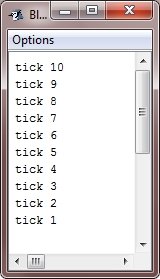 Let's look at one more example, also demonstrates the for loop:

The sample run is shown here :

Here are some list of example programs that uses for loop :