In Java, a method can return any type of data, including class types that you can create. For example, in the following Java program, the method incrByTen() returns an object in which the value of a is ten greater than it is in the invoking object. 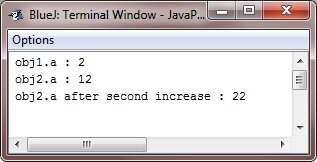 As you can see, each time the method incrByTen() is invoked, a new object is created, and a reference to it is returned to the calling routine.

The preceding program makes another important point i.e., since all the objects are dynamically allocated using the new operator/keyword, you don't need to worry about an object going out-of-scope because the method in which it was created terminates. The object will continue to exist as long as there is a reference to it somewhere in your program. When there are no references to it, the object will be reclaimed the next time garbage collection takes place.