Memory can be managed with the least amount of complexity if only one program is executed at a time. The operating system and the running program will share the memory. There are three different takes on this general concept, which are outlined in the figure that follows: 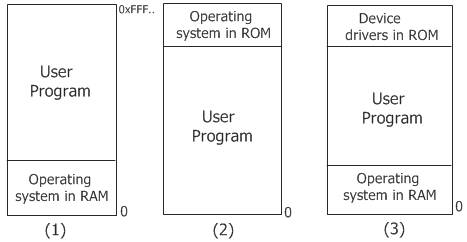 The operating system could be located at the bottom of the memory in RAM, as demonstrated in the first figure. The abbreviation RAM stands for "random access memory" in this context.

In addition, as demonstrated in the second figure presented above, the operating system (OS) may be located at the very beginning of the memory that is stored in ROM. Read-only memory is referred to as ROM in this context.

In addition, as demonstrated in the third and final figure presented above, the device drivers may be located at the top of the memory in a read-only memory (ROM), whereas the remaining components of the system are located below the device drivers in random-access memory (RAM).

The first model is one that is utilized on mainframes and minicomputers but is not utilized as frequently as it was in the past.

The second model is implemented on a select number of embedded systems and palmtop computers.

The third model was the one that early personal computers like MS-DOS used.

When the system is set up in this manner, there is room for only one process to be active at any given time. The operating system immediately copies the program from the hard drive into memory and begins running it as soon as the user types a command into the command prompt.

When the process is complete, the operating system will show a prompt character and wait for a new command to be input. After it has been given a command, it will load a new program into memory, which will replace the one that was there previously.