The most important resource is memory, which must be carefully managed.

Every programmer, and even the average computer programmer or user, desires an infinitely large and fast memory. And the memory is also non-volatile memory, meaning a memory that doesn't lose its content when the power supply stops.

The memory hierarchy in the operating system is managed by the memory manager.

There is another use for a memory manager, which is to manage the swapping between main memory and disc when main memory is too small to hold all the processes.

Today, efficient memory management must be performed because software is growing even faster than memory.

You will learn all about memory management in detail, divided into the following topics:

Almost all computer systems today allow multiple processes to run concurrently. When multiple processes run at the same time, it means that while one is waiting for input or output to complete, another can use the central processing unit.

As a result, multiprogramming makes better use of the central processing unit. Both network servers and client machines can now run multiple processes at the same time.

Relocation and protection are the two problems introduced by multiprogramming that must be solved.

During loading, relocation doesn't solve the protection problem. A malicious program can always construct a new instruction and jump to it. Because programs in this system use absolute memory addresses rather than addresses relative to a register.

There is no way to prevent a program from constructing instructions that read or write words in memory.

In multi-user computer systems, it's totally undesirable to let the processes read or write memory that belongs to the other users.

As a result, IBM's solution for simply protecting the 360 was to divide the memory into 2KB blocks and assign each block a 4 bit protection code.

The 360 hardware trapped any attempt by a running process to access the memory, whose protection code was different from the program status word key.

Every memory address generated automatically has the contents of the base registers added to it before being sent to memory.

Memory is divided up into allocation units using a bitmap.

Because the bitmap size is determined by the memory size and the allocation unit size, it provides an easy way to keep track of memory words in a fixed amount of memory.

Another method for keeping track of memory is to keep a linked list of allocated memory segments and free memory segments, where a segment is either a process or a gap between two processes.

Several algorithms can be used to allocate memory for a newly created process or an existing process that is being swapped in from disc when processes and holes are kept on a list that is sorted by address. We assume that memory management is aware of how much memory to allocate. Algorithms of various types can be used to accomplish this.

The table below describes the various types of algorithms:

The basic idea behind virtual memory is that the combined size, data, and stack of the program may exceed the amount of physical memory available to it.

The operating system keeps the parts of the program that are currently in use in main memory and the rest on disc.

Virtual memory in a multiprogramming system can also work with bits and pieces of multiple programs in memory at the same time. While a program is waiting for a portion of itself to be brought in, it is waiting for input or output and cannot run, so the central processing unit can be given to another process in the same way that it is given to other processes in other multiprogramming systems.

When a page fault occurs, the operating system must choose which page to remove from memory to make room for the page that must be brought in.

If the page to be removed has been modified or edited while in memory, it must be rewritten to disc just to bring the disc copy up to date.

If the page has not been changed or modified, there is no need to rewrite. The disc copy is already up to date in this case.

Simply select a random page for each page fault. When a non-frequently visited page is selected, system performance improves significantly. If a frequently used page is deleted, it must be quickly restored, adding to the overhead.

The page replacement algorithm has received a great deal of attention, both experimentally and theoretically.

The following is a list of the most important page replacement algorithms, along with a brief description of each.

The allocation of memory among running processes is a major issue with the paging system. The three processes that comprise the set of runnable processes are depicted in the figure below as A, B, and C.

Assume Process A experiences a page fault. The question now is whether the page replacement algorithm should try to find the least recently used page, given that process A currently has only six pages allocated to it, or whether it should consider all pages in memory.

If it only looks at the pages of process A, the page with the lowest age value is A5, resulting in the following situation:

What if the page with the lowest age value is removed regardless of who owns it?
Then page B3 will be selected, resulting in the situation depicted in the figure below:

Global algorithms perform better than local algorithms in general, especially when the size of the working set varies over the course of the process.

Even with the best page replacement algorithm and optimal global allocation of page frames to process, the system can become overloaded.

When the combined working sets of all processes exceed the memory capacity, the system will thrash.

One symptom of this situation is that the page fault frequently (PFF) algorithm indicates that some processes require more memory than others. In this case, there is no way to provide additional memory to those processes that require it without interfering with other processes.

To reduce the number of processes competing for memory, simply move some of them to disc and free up all the pages they are holding.

The page size is a parameter that can be chosen by OS.

To determine the best page size, several competing factors must be balanced. As a result, there is no overall best solution. Two factors influence the size of a small page.

In general, a large page size will result in more unused programs in memory than a small page size.

As shown in the figure given below, most computer systems have a single address space that holds both programs and data. 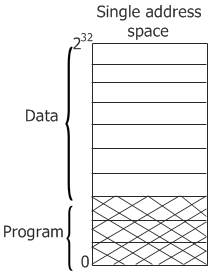 Everything works fine if this address space is large enough. But sometimes it is too small, forcing the programmer to just stand on their heads to fit everything into the address space.

A solution is to have separate address spaces for the program text and the data. There are two distinct areas known as I-space and D-space. Here, each address space runs from 0 to some maximum, typically 232-1. You can see both of them in the figure given below: 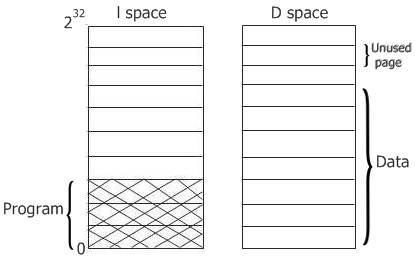 With this design, both address spaces can be pages in the computer system independently of one another.

In an event where the previous page contents are remembered, one of the evicted pages is needed again before it is overwritten. It can be reclaimed just by deleting or removing it from the pool of free page frames.

For your information, keeping the supply of page frames around yields much better performance than using all of the memory and then trying to find a frame at the moment it is needed.

The paging daemon (a background process to ensure a plentiful supply of free page frames) ensures that all the free frames are clean, so they don't need to be written to disc in a hurry whenever they are required.

And the back hand is simply used for page replacement, as in the standard clock algorithm. Now, the probability of the back hand hitting a clean page is increased just due to the work of the paging daemon.

Prior to this topic, we assumed that virtual memory is transparent to processes and computer programmers, that is, that all they see is a large virtual address space on a computer system with limited physical memory.

That is true for many computer systems; however, in several advanced computer systems, computer programmers have some control over the memory map and can use it in unconventional ways to improve the program's behavior.

A solid reason for giving the computer programmers control over their memory map is just to allow multiple processes to share the same memory.

High bandwidth sharing becomes possible when multiple processes share the same pages, that is, when one process writes into shared memory and another reads from it.