Even on a computer with only one user, the two-level directory system is cumbersome and time-consuming to use. Users frequently express a desire to organize their files in a manner that makes sense to them, as a result. As a consequence of this, a general hierarchy of some kind is required.

The term "hierarchy" refers to a tree structure made up of directories.

A hierarchical approach allows for each user on a computer system to have access to as many directories as they require. This makes it possible for files to be organized in a manner that is more intuitive.

The following hierarchical directory structure is depicted in the figure that follows: 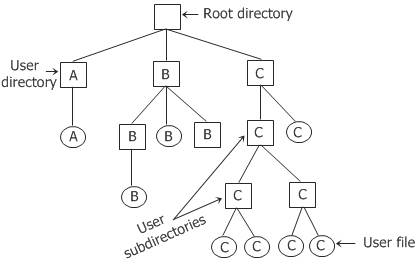 As can be seen in the figure that is located above, the directories X, Y, and Z that are located within the root directory each belong to a different user, and two of those users are the ones who have created the sub-directories for the project that they are currently working on.

Now, if we talk about the more practical side of things, think of the word "hierarchy" as a structure that has multiple levels, ascending from the most basic to the most complex.

For illustration's sake, let's imagine that a user navigated to any of the folders on the hard disc drive, say "C-Drive," and then created a folder in "C-Drive" called "my folder." After that, he goes into the newly created folder and creates multiple folders within it. After that, he goes into any of the newly created folders and creates more folders inside of them. Additionally, at some point in time, he will either create new files or save existing ones in one of the folders. These are essentially components of directory systems that are organized hierarchically.

Let me illustrate with a screenshot for your convenience. So I took the photograph, which is included below.

Let me first clarify something: the example I've used is not part of the directory and files that the user creates, because when I installed the software "Google Chrome," the directories associated with this software were created automatically. The file's location is as follows: C:\Program Files\Google\Chrome\Application.

In the preceding example, "C" is the root directory, "chrome.exe" is the user file, and "Program Files" is the user directory. "Google," "Chrome," and "Application" are the remaining user sub-directories.