And UNIX-based operating systems support the following types of files:

Regular files contain user information. Generally, regular files are either ASCII files or binary files. These two types of files are described below.

Directories are the system files that are used to maintain the structure of the file system.

To keep track of files, file systems typically use directories. Directories are files in and of themselves in many systems.

The following sections will teach you about directories in the operating system:

The "hierarchical directory systems" and the "directory operations" are the two sections that are covered in the next two articles. whereas all others are described in this article. So let's start with "single-level directory systems."

The simplest form of the directory system is a directory that contains all of the files, also known as the root directory. This system was common in earlier PCs because there was only one user.

The world's first supercomputer, the CDC 6600, also had only a single directory for all files and was used by multiple users concurrently.

This system was created to keep every software design as simple as possible. The diagram below depicts an example of this system.

Having only one directory in a system with multiple users may result in different users accidentally using the same names for their files.

The figure given below shows this system: 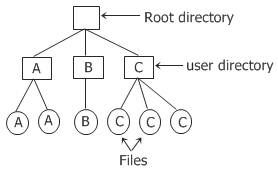 When the file system is organized as a directory tree, a method for specifying the names of the files is required, and this method must be discovered. As a result, the file names are typically specified using one of the two methods that are listed below:

The path from the top-level directory all the way down to the file is what the "absolute path name" refers to. As an example, the path

On the Windows platform, the above-mentioned path name can be specified using the following format:

The relative path name is used in conjunction with the concept of the working directory or current directory.

Character special files are mostly about I/O and are used to model serial input/output devices like printers, networks, and so on.

Basically, block-specific files are used to model the disks.