Sometimes, for many computer applications, a process needs exclusive access to several resources.

Let's suppose, for example, that there are two processes and each wants to record a scanned document on a pen drive. Process X requests permission to use the scanner and is granted it. And process Y is programmed differently and requests the pen drive recorder first, which is also granted. Now X asks for the pen drive recorder, but the request is denied until Y releases it.

Now, instead of releasing the pen drive recorder, Y asks for the scanner. At this point, both processes are blocked and will remain blocked forever. This situation is called "deadlock."

Deadlocks can also occur between computer machines at times. For example, many offices have a LAN (local area network) connected to multiple computers.

Often, devices such as scanners, DVD recorders, printers, and tape drives are connected to the network as shared resources, available to any user on any machine.

Now, unfortunately, all these devices can be reserved remotely; this situation is also called deadlock.

Here is a list of the topics we will cover in this and two other posts about deadlocks in operating systems:

When processes have been given exclusive access to computer devices, files, etc., deadlocks can happen. A resource can be a computer hardware device or a piece of information.

Generally, a computer has many resources that can be acquired. You can also say that a resource is anything that can be used by only one process at a time.

Requesting the resource, using it, and finally releasing it are the three sequences of events required to use it.

If a resource is not available when it is requested, the requesting process is forced to wait.

According to computer scientist and programmer Coffman et al., the following four conditions described in the table below must hold for deadlock to occur.

A computer scientist and programmer named Holt showed how the four conditions for deadlock can be modeled using directed graphs. This graph is depicted below. 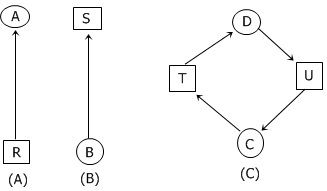 In the above resource allocation graphs, the figures A, B, and C represent:

According to Hold, these graphs have the following two types of nodes:

The system does not attempt to prevent deadlocks when deadlock detection and recovery techniques are used. However, it allows them to occur, attempts to detect them whenever this occurs, and then takes action to recover after the fact.

The following two cases for deadlock detection will be discussed in this section.

To build a good computer system, deadlock avoidance must be practiced. In other words, the system must be able to decide whether granting a resource is safe or unsafe. And the system must only make the allocation when it is totally safe.

And the system must only make the allocation when it is totally safe.

Deadlock avoidance is basically not possible because it requires information about future requests that isn't known.

If we can ensure that at least one of the four conditions for deadlock is never satisfied, then deadlock will be structurally impossible.

Now, the table below briefly describes each of the four conditions for deadlocks (that we have learned about or discussed in previous tutorials).