I'll explain these two topics in terms that any programmer can understand.

What is the matrix?

In the programming world, a matrix is basically a two-dimensional (2D) array. Here "two dimension" means the element of an array arranged in two dimensions, which are rows and columns. Rows are from top-to-bottom, whereas columns are from left-to-right. For example, 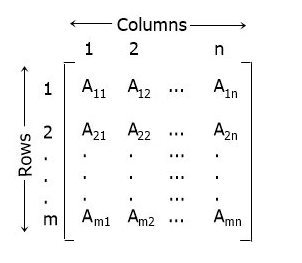 As you can see from the above matrix, there are a total of m numbers of rows and n numbers of columns. And A11, A12, ....., Amn are matrix elements arranged in such a way that the element

Here is the step-by-step process to multiply the two given matrices:

In this way, you can perform matrix multiplication.

Condition for matrix multiplication to be performed

In order for matrix multiplication to be performed or defined, the number of columns in the first matrix must be equal to the number of rows in the second matrix.

The binary process known as "matrix multiplication" creates a matrix from two matrices. The first matrix's columns must have the same number of rows as the next matrix's rows in order for matrices to be multiplied.

The number of rows in the first matrix and the number of columns in the secondary matrix are added together to form the final matrix, or matrix product. The letters AB stand for the result of the matrices A and B. Thus, matrix multiplication is a fundamental tool of linear algebra and already has various uses in many branches of pure and practical arithmetic, including in statistics, physics, economics, and engineering. 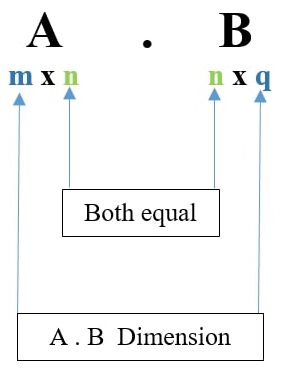 Assuming we possess two matrices A and B, matrix A may be multiplied by matrix B using the formula (AB). To put it another way, the resulting matrix for multiplying any m x n matrix "A" with a n x q matrix "B" may be expressed as matrix "C" of order m x q.

We can understand the general procedure of matrix multiplying by using the concept that "initial rows were multiplied with columns (component by component), and then all rows were completely filled."To multiply a matrix, use one of the following basic methods:
Step one is ensuring that the number of rows inside the second matrix matches the number of columns within the first matrix.

Phase 3 is setting up the additional goods in their proper locations.

Find the multiplication of A and B matrices. The matrix A =