Recursion or Recursive Function in C

In this article, we will learn about recursion in C with an example. That is, you will get a brief explanation of the working principle of a recursive function in C.

What are recursive functions?

When a function calls itself during its definition or execution, it is known as a recursive function. For example, a function named printFiveTime() calls itself to print anything, say my name, five times, as shown here in the following program:

This program was written in the Code::Blocks IDE. Here is the sample run: 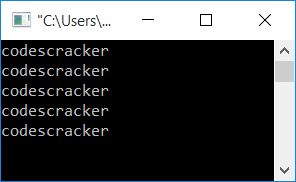 How does a recursive function get executed?

Memory will be allocated inside the RAM to execute a function in the application (here, memory is referred to as stack memory). That is, to execute a function (or method, or block), some amount of memory will be allocated inside the stack memory, which is called a frame. For each function or method execution, a specific amount of memory is allocated.

As you can clearly see, the frame for the main() function gets created inside the stack memory. Here in the first statement, we are calling the printFiveTime()  function, so for this function, another frame will be created like this: 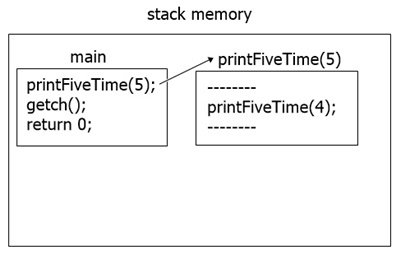 As t-1 or 5-1 gives 4, we have just passed 4 to the printFiveTime() function. Now, for this function, another frame gets created. The frame continues creating until the value of t becomes 0, as shown in the image given here: 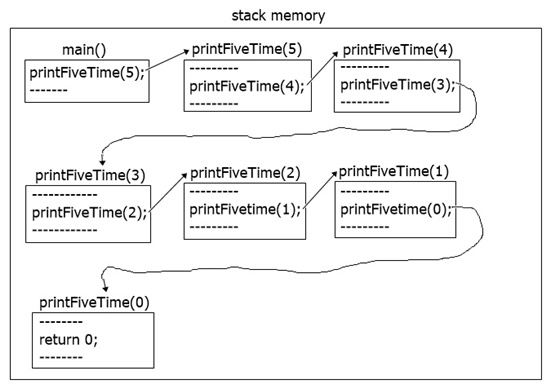 gets executed. So here, once all the function space gets clearly defined with its value, all the frames get deleted. In a recursive function, control goes in the forward direction until and unless all the frame's statements get clearly executed. And in whatever order the control goes (in a forward direction), in the same order the control should come back, and where it starts the execution, only there should it complete the execution.

To clarify the above statement (about the flow of forward and backward directions in recursive functions), you can print the value of t along with codescracker as shown in the following program:

The snapshot given below shows the sample run: 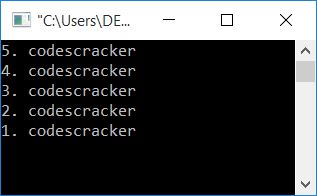