Pointers are very important in C language. The correct understanding and use of pointers is important to successful C programming. There are the following reasons behind this:

A pointer is a variable, holds a memory address. And this address is the location of another object (generally another variable) in memory. For instance, if one variable contains the address of another variable, then the first variable is said to point to the second. Here is the figure for illustration of this situation: 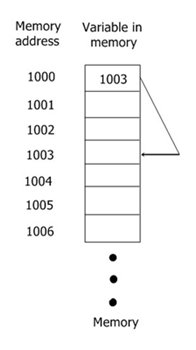 If a variable is going to be a pointer, it must be declared like this:

As you can see, a pointer declaration consists of a base type, an *, and then the variable name. Here type is the base type of the pointer and may be any valid type. And the name of the pointer variable is specified by name.

There are the following two pointer operators:

The & is a unary operator, returns the memory address of its operand.

Always remember that a unary operator only requires one operand. Here is the example.

The pointer *, is the complement of &. It is a unary operator that returns the value located at address which follows. It is also called as 'value at address' operator. For instance, if m contains the memory address of the variable count, then

places the value of count into n. That is, if count have the value 10, then n will also having the same value which is 10.

Here is the example program of pointer assignments:

In this program, after this assignment sequence:

ptr1 and ptr2 both point to a. Here is the sample output of this C program:

Note - Always keep in mind that the address are displayed by using the %p printf() format specifier, that causes the printf() to display an address in the format used by the host computer.

Pointer conversions required when pointer of one type is going to point other data type's variable or going to assign other type's pointer.

Here is the program which attempts to assign the value of a and b, through the pointer ptr. This program compiles without an error, but the output will not the desired output.

Here is the output of this C program:

In C language, there are only the following two arithmetic operations that you can use on pointers:

To understand about the pointer arithmetic pointer, let's assume that a pointer ptr1 is an integer pointer with a current value 1000. Also, assume that ints are 2 bytes long. So after the expression

ptr contains 1002. The reason for this is that each time when ptr is incremented, it will point to the next integer. The same concept is for decrements.

Now concentrate on this example program:

Here is the sample run of this C program: 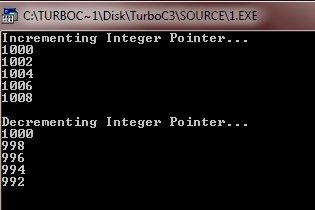 In C language, you can also compare two pointers in a relational expression. For instance, here given two pointers ptr1, and ptr2, this statement is totally valid in C:

Here is a simple example program to illustrates the concept of pointer comparisons. Just concentrate on this, this program is based on the stack. To stop the program, just enter -1.

Here is the sample run of this program: 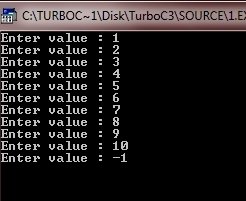 To learn more about C stack, follow our separate tutorial on C Stack in detail.

In C language, there is a close relationship between pointers and arrays. Let's consider this code fragment:

Here is the example program. Just concentrate on this program.

Here is the sample run of this C program: 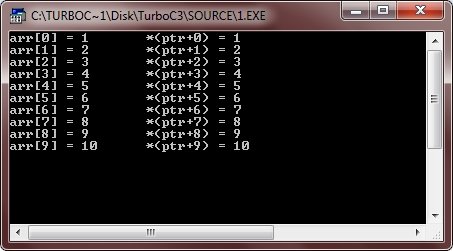 To access the target value indirectly pointed to by a pointer to a pointer, then you must apply the asterisk operator twice as shown here in the example program:

Here is the sample output of this C program:

In C language, after a non-static, local pointers is declared but before it has been assigned a value, it contains an unknown value. Global and static local pointers are automatically initialized to null.

Important - Should you try to use the pointer before giving it a valid value, you will crash your program and may be your computer's operating system as well, a very nasty type of error!.

Now concentrate on this example program to understand the concept of pointer initialization in C language.

Here is the four sample run of this program, two for found, and other two for not found.

A particularly confusing but powerful feature of C is function pointer. As you know, a function has a physical location in memory that can be assigned to a pointer. This address is the entry point of the function and it is the address used when the function is called. Once a pointer points to a function, the function can be called through that pointer. And an important things is that, you can also allow functions to be passed as arguments to other functions. Here is the example program.

Here is the two sample output of this C program, one for equal and other for not equal:

In the above C program, examine this declaration for p in main() function.

This declaration tells the compiler that ptr is a pointer to a function that has two const char * parameters, and returns an int result. The parentheses around p are necessary in order for the compiler to properly interpret this declaration. You must have to use the similar form when declaring other function pointers, although the return type and the parameters of the function may differ.

Let's take a look at one more example to understand the concept of pointers to functions completely.