Every C program must contains a function called main(), because program execution starts from main(). For example, here is the simple and smallest C program, which would print "Hello Compiler" on the output screen:

Here is the sample output of the above C program:

From the above program, you can filter out like this:

In C, a token is either a keyword or a constant or a string constant or a symbol or an identifier. And a C program consists of various tokens, depends on, how long the program is. Let's look at the following example, here the statement consists of total five tokens:

Here, the individual tokens from the above statements are:

In C Programming, comments are just like a helping text in your C program. They are ignored by the compiler. Comments are very useful in reviewing the code. Since at the time of reviewing the code, given comments helps a lot for a programmer. As comments, programmer can add useful information or reminder about some line of code or something for other purposes.

In C language, there are the following two types of comments:

Here is the sample output of this C program. You will see, only "Welcome to codescracker.com" will be printed on the output screen. And as already told, all the comments are ignored by the compiler. Because comments can only be read by the programmer.

In C programming, an identifier is the name that is used to identify a variables, functions, or any other user-defined terms. An identifier can start with letters (A to Z) or (a to z) or an underscore ( _ ) followed by zero or more letters, underscores, and digits (0 to 9)

C does not allows punctuation characters (special characters) like @, $, and % within identifiers. Since C programming is a case sensitive programming language. Thus, Total and total are the two different identifiers in C. Here the following table lists some valid identifiers :

Here is an example program. Just concentrate on this. This program also illustrates that the num and Num or name and Name are different-different identifiers:

Here is the sample run of the above C program: 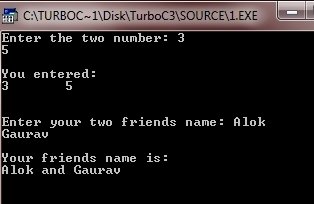 Keywords are the reserved words having special meaning. Here the following table lists the C keywords:

In C programming, any line containing only whitespace, like with a comment, is known as a blank line, and the C compiler completely ignores it. Whitespace is a term used in C programming that describe the blanks, tabs, newline characters and the comments. Whitespace separates one part of a statement from another part of a statement and it enables the compiler to identify that where one element in a statement, like int, ends and the next element begins. Here this statement:

There must be at least one whitespace character (generally a space) between int (data type) and sum (variable) for a compiler to be able to distinguish them. If you will not insert a whitespace between them then it will become intsum and will be treated as an identifier.

Here are the list of some examples that you can go for: