Stack is a well-known data structure, and you'll find out all about it here. Let's get right down to the introductory section then.

To organize information in a sequential order, one can use a data structure called a stack. Data are stacked as shown in the diagram below.

Color plates are arranged in a stack in the figure above. Let me explain why these color plates are organized in a stack: in a linear data structure, if elements can only be inserted or deleted from one side (the top), this is referred to as the stack. Consider the following scenario: all plates are stacked on top of each other in a canteen, and we can either add a new plate to the stack or take one from the top. That is, we can only take a plate from the top and place it on the stack at the top.

Stack adheres to the LIFO principle

The data structure "stack" adheres to the Last-In-First-Out (LIFO) principle, which states that the elements of the stack inserted last are the first to come out. Consider the following real-world example: if we add a new plate to the stack of plates, anyone who wants to take one plate from the stack will get the plate that was most recently placed on top of the stack, indicating that the stack adheres to the LIFO principle. 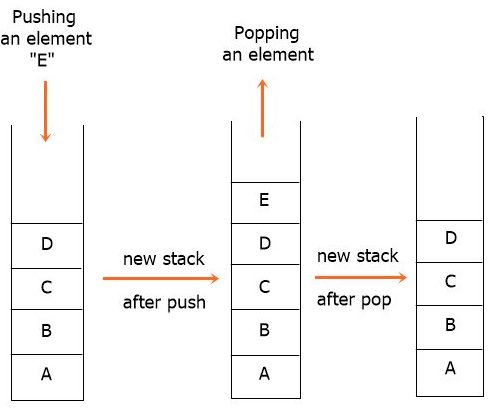 The above pictorial representation of stack operations shows that the first stack has four elements, and when we push a new element, say "E," into it, it is added to the top of the stack. As a result, the second stack is the stack that results from pushing "E" into the first stack. Because popping always happens at the top of the stack, popping an element from the stack pops the top element, which in the above stack is "E"; thus, after popping "E" from the stack, we get the third stack, as shown in the above snapshot.

After reading the above description of stack operations, push and pop, I don't think you'll have any doubts that both are always performed to the top of the stack.

In programming, how does the Stack data structure work?

Because I already stated that we only store the address of the stack's top element using a pointer called "Top," stack operations involving the "Top" pointer work as follows: