Hello there, How are things going for you?
I hope everything is fine. 😀

My name is Nick, and I'm your C# instructor. This C# tutorial is intended for those who want to start a career in the field of C# or who want to learn more about C#.

This C# tutorial was created with all of the beginners in mind who don't know the first thing about C#.

The whole C# tutorial is divided into this and some other articles. This post contains almost all the details a beginner needs to know, from printing the data on the output console to receiving the data from the user. But before we begin the tutorial, let's list all the topics covered in this post so that it's easier for you to navigate to any particular topic.

C# is a general-purpose, high-level computer programming language that supports a variety of paradigms, including imperative, structured, functional, object-oriented, event and task-driven, and so on.

To be honest, C# is a powerful language for developing mobile, desktop, and web applications.

Please note: C# code appears to be very similar to Java code. As a result, learning C# for Java programmers will be much simpler. Similarly, if you don't know anything about Java, you'll be able to learn it quickly after learning C#.

Who designed the C# programming language?

Who developed the C# programming language?

When was C# first introduced?

What is/are the filename extension(s) of C#?

Getting Started with C#

Now you have enough knowledge to begin coding in C#. Instead of learning everything there is to know about a language, I believe it is better to focus on its coding skills. So let's get started. 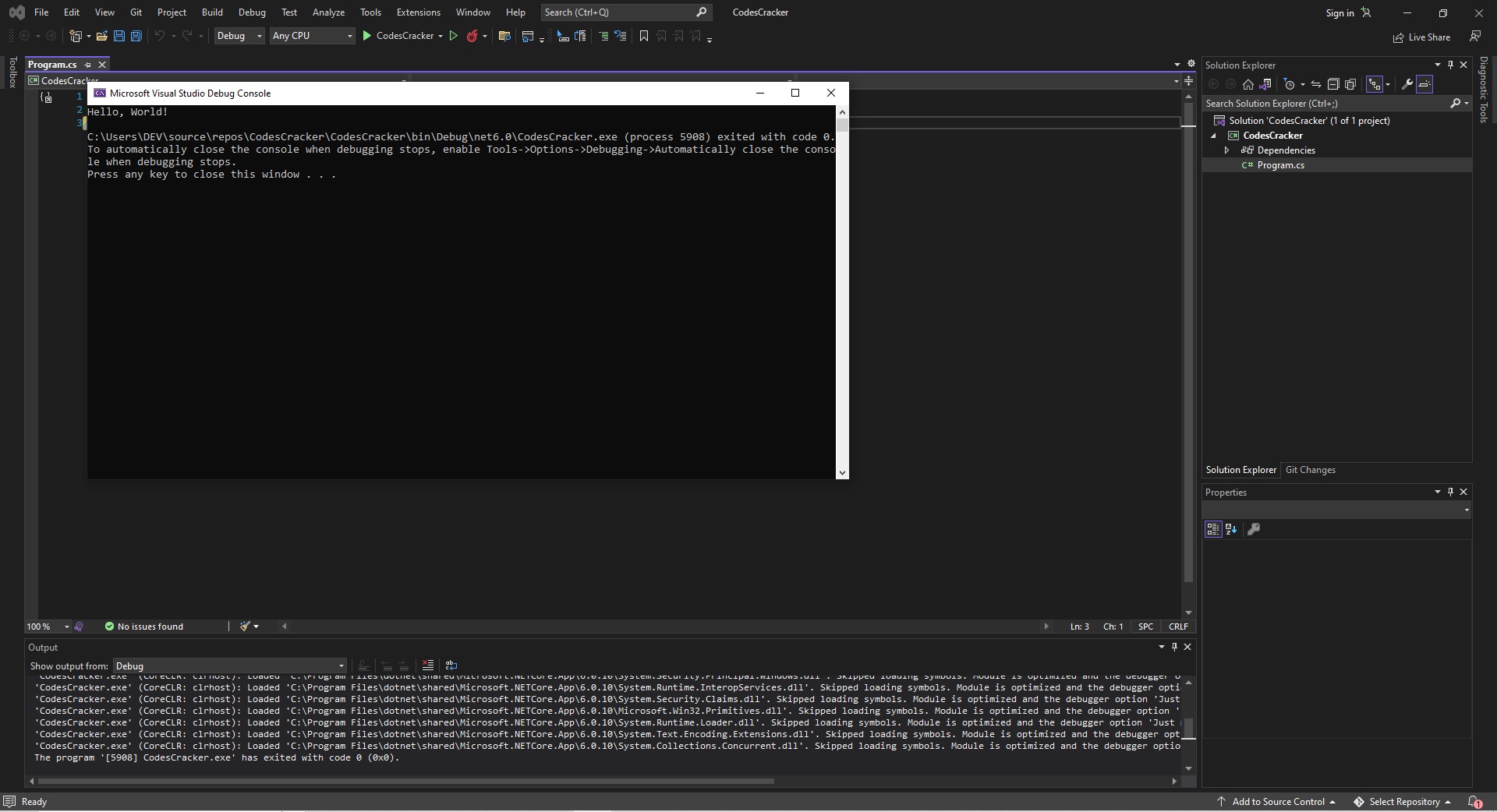 Let me now write the first C# program. The code is as follows:

The screenshot below shows the "Microsoft Visual Studio Debug Console" that appears after pressing the F5 button to execute the written C# program, and it displays the output produced by the C# program.

I used a red arrow to draw your attention to the output, which is "Hello, World!"

A namespace is a container for either classes or other namespaces. A class, on the other hand, is a container for methods. Because all C# code must be contained within a defined class, we can refer to that class as a data container. The first line of code in the above C# program is:

The keyword here is using, and the namespace is System. This line of code indicates that I will use the System namespace in the program.

Now let's look at the second line of C# code:

Using this code, I'm creating my MyFirstProgram namespace, where I'll write all of my C# code for the current C# program. Then I've added curly braces or {}, that is used to start and/or end the code block. As a result, following MyFirstProgram, I'm beginning to write a new block of code. Now comes the third or fourth (depending on whether we include the curly bracket) line of code:

I'm making a class called MyClass with this code. I used an open curly bracket to start another block of code to write/create. Now comes the fourth or sixth (depending on whether we include the second opening curly bracket) line of code:

This line of code will be included in all C# programs. Because every C# program requires a Main() method. The Main() method is the method that begins the execution of the C# program.

I've added the keywords static and void before the Main() method. When a method is declared static, it means that no object can call it. And void is the return type, which means that no value is returned.

Another code snippet can be found within the Main() method: String[] args, which represents an array of a sequence of strings passed to the method Main(). This occurs when the program is run. This will be important when we pass parameters to the Main() function during program execution.

Now, ignoring the curly braces, the final line of code is:

In which Console is the System namespace class, and WriteLine() is the method that writes the string written inside it to the output. You can also remove the first line of code from the preceding C# program and write System. before Console.WriteLine() as follows, to get the same output.

However, I can also use Microsoft Visual Studio IDE to write the WriteLine() method directly to produce the same output. The code is as follows:

C# is a Case-Sensitive Language

C# is a case-sensitive language. Therefore codescracker, CodesCracker, and Codescracker are all three different variables in C#.

To perform a similar task, the Write() method can be used instead of WriteLine(). WriteLine() appends a newline to the output console window, while Write() does not. For example:

In C#, comments are used to explain or halt the execution of a block or line of code. In a C# program, comments are never executed as code. When debugging code, programmers may use comments.

A comment spans only one line and starts with //. On the other hand, comments span multiple lines and begin with /* and end with */. For example,

The output produced by the above C# example created to demonstrate C# variables should exactly be:

In the previous example, num, website, and temp are the names of variables. where int and string are its data types. We will discuss data types in C# just after this section, but before we get to data types, let's first understand the rules that can be used to name a variable in C#.

The very simple rules we need to keep in mind while naming a variable in C# are:
A variable can be a combination of letters, digits, and underscore characters, but it must start with a letter. For example: mynum, my_num, myNum, mYNUM, my23num, mynum23_, and m23my4m3. Since C# is a case-sensitive language, therefore the variable mynum is not equal to myNum.

The output produced by this C# example should be

In the above C# example, the {0} basically represents the value of area. It is used to print formatted strings on the output console.

Data types in C# are equally important to C# variables, as while declaring a variable, we need to define its data type to define what type of values the variable can hold.

For example, if a variable, say myVar, is used to hold small values, then there is no need to define the variable as of the long type, whose size is 8 bytes. The table given below shows the keyword used to define the type of variable along with its size and a brief description:

Please note: While defining variables of the float and double types, we need to end its values with F and D in this way:

Now let me create an example demonstrating the use of variables with different data types in the same program.

The output of the above C# example demonstrating the data types should exactly be:

The output of this C# example demonstrating typecasting should exactly be:

Receive Input from User in C#

If you execute this C# example, here is the output, which you'll see:

Now if you type and press the ENTER key, the entered text will be stored in the variable named mytext, and its value will be printed back on the output console using Console.WriteLine() method. For example, in my case, let me type "C# Programming is Fun!" and press the ENTER key. The snapshot given below was taken of the output console after executing the same program with the same input as I said right now. 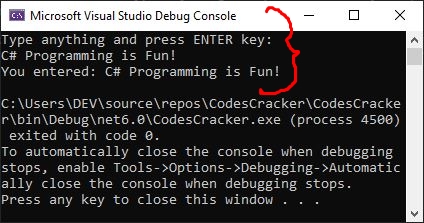 The snapshot given below shows the sample run of this C# example demonstrating the receiving of a number from the user at run-time of the program. 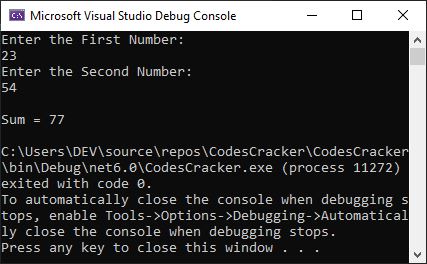 Now follow the "Next Tutorial" button right after this paragraph to continue the C# tutorial. Since the content is becoming a little lengthy, I decided to split some of the remaining content into separate articles.