A method in C# is a block of code used to perform a particular task. Methods are used when we need to create a block of code once and execute it multiple times. You will understand why I am saying this later on this page. But for now, let's show you the general form for creating a method in C#.

Since I used static as an access specifier, it is not required to create an instance of the program for this method to work. Then I used void as the return type, which means that the method greeting() will not return any value.

Now, to call a C# method, just write the method along with its parameters if the method that is going to be called accepts parameters. Since the previous method I defined, which was greeting(), does not accept any parameters, to call this method I have to write the name of the method followed by parantheses or () in this way.

Let me create a proper C# example to demonstrate the definition and calling of a function.

The snapshot given below shows the exact output produced by the above C# example. This snapshot was taken from the output console of Microsoft Visual Studio after executing the above C# program. 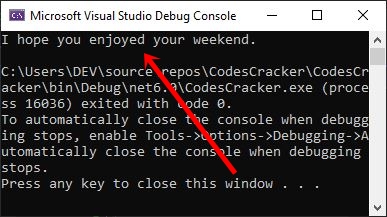 I used the red arrow to draw your attention to the output. Since the execution of the C# program starts with the Main() method, you need to call your defined method from inside this method. Also, you can call the same method multiple times.

In this section, I will tell you how you can pass parameters to a method.

A parameter is used to pass it as information. The parameter will act as a variable inside the method definition. Let me give you an example, and then I will explain how the thing works.

The sample run with user inputs of 12 and 43 as the first and second numbers is shown in the snapshot given below.

The dry run of the above C# program goes this way.

We can also create a method in C# that can return values. Here is an example demonstrating a function with a return value in C#.

You will get the same output as the previous example's output.