Although the default exception handler provided by the Java run-time system is useful for debugging, you will usually want to handle an exception yourself. Doing so provides the following two benefits:

Most users would be confused if your program stopped running and printed a stack trace whenever an error occurred. Fortunately, it is quite easy to prevent this.

To guard against and handle a run-time error, simply enclose the code that you want to monitor inside a try block. Immediately following the try block, include a catch clause that specifies the exception type that you wish to catch.

To illustrate how easily this can be done, the following program includes a try block and a catch clause that processes the ArithmeticException generated by the division-by-zero error : 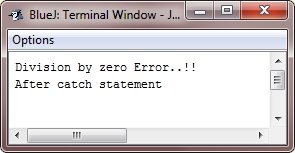 Notice that the call to println() inside the try block is never executed. Once an exception is thrown, program control transfers out of try block into catch block. Put differently, the catch is not "called", so execution never "returns" to the try block from a catch. Thus, the line "This will not be printed" is not displayed. Once the catch statement is executed, program control continues with the next line in the program following the entire try / catch mechanism.

The goal of most well-constructed catch clause should be to resolve the exceptional condition and then continue on as if the error had never happened. For example, in the upcoming example program each iteration of the for loop obtains the two random integers. Those two integers are divided by each other, and the result is used to divide the value 23456. The final result is put into variable x. If either division operation causes a divide-by-zero error, it is caught, the value of x is set to zero, and the program continues.