A superclass's reference variable can be assigned a reference to any subclass derived from that superclass. You will find this aspect of inheritance quite useful in a variety of situations. For example, consider the following example program:

It is important to understand that it is the type of the reference variable, not the type of the object that it refers to, that determines what members can be accessed i.e., when a reference to a subclass object is assigned to a superclass reference variable, you will have access only to those parts of the object defined by superclass. This is why plainbox can't access weight even when it refers to a BoxWeight object. If you think about it, this makes sense, because superclass has no knowledge of what a subclass adds to it. This is why the last line of code in the preceding code fragment is commented out. It is not possible for a Box reference to access the weight field, because the Box doest not define one.

In the preceding example, classes derived from the Box were not implemented as efficiently or as robustly as they could have been. For example, the constructor for the BoxWeight explicitly initializes the width, height, and the depth fields of Box. Not only does this duplicate code found in its superclass, which is inefficient, but it implies that a subclass must be granted access to these members. However, there will be times when you will want to create a superclass that keeps the details of its implementation of itself (i.e., that keeps its data members private). In this case, there would be no way for a subclass to directly access or initialize these variables on its own. Since encapsulation is a primary attribute of OOP, it is not surprising that Java provides a solution to this problem. Whenever a subclass needs to refer to its immediate superclass, it can do so by the use of super keyword.

The super has the following two general forms :

Let's examine both general forms of the super one by one.

A subclass can call a constructor defined by its superclass by use of the following forms of the super :

Here, arg-list specifies any arguments needed by the constructor in the superclass. The super() must always be the first statement executed inside a subclass constructor.

To see how the super() is used, consider the following improved version of the BoxWeight class :

Here, BoxWeight calls the super() with the argument wei, hei, and dep. This causes the Box constructor to be called, which initializes the width, height, and depth using these values. The BoxWeight no longer initializes these values itself. It only needs to initialize the value unique to it: weight. This leaves Box free to make these values private if desired.

In the preceding example, super() was called with three arguments. Since constructors can be overloaded, the super() can be called using any form defined by the superclass. The constructor executed will be the once that matches the arguments. For example, here is a complete implementation of the BoxWeight that provides constructors for the various ways that a box can be constructed. In each case, the super() is called using the appropriate arguments. Notice that the width, height, and depth have been made private within the Box. 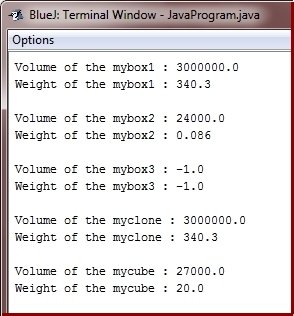 Pay special attention to this constructor in BoxWeight :

Notice that the super() is passed an object of type BoxWeight, not of type Box. This still invokes the constructor Box(Box obj). As mentioned earlier, a superclass variable can be used to reference any object derived from that class. Thus, we are able to pass a BoxWeight object to the Box constructor. Of course, Box only has knowledge of its own members.

The second form of super acts somewhat like this, except that it always refers to the superclass of the subclass in which it is used. This usage has the following general form :

Here, member can be either a method or an instance variable.

This second form of the super is most applicable to situations in which the member names of a subclass hide the members by the same name in the superclass. Consider the following simple class hierarchy: 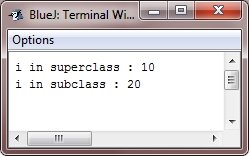 Although the instance variable i in B hides the i in A, super allows access to i defined in the superclass. As you will see, the super can also be used to call the methods that are hidden by a subclass.