Although the main thread is automatically created when your program starts, it can be controlled through a Thread object. To do so, you must obtain a reference to it by calling the method named currentThread(), is a public static member of the Thread. Its general form is :

Here is an example demonstrates the concept of main thread in Java: 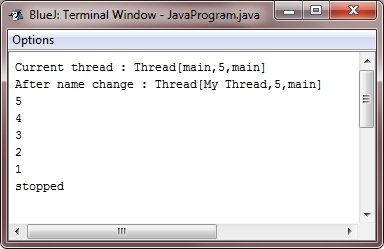 In the above program, a reference to the current thread (main thread in this case) is obtained by calling the currentThread() method, and this reference is stored in the local variable i.e., thr. Next, the program displays the information about the thread. The program then calls setName() method to change the internal name of the thread. Data about the thread is then redisplayed. Next, a loop counts down from five, pausing one second between each line. The pause is executed by the sleep() method. The argument to sleep() specifies the delay period in milliseconds.

Notice here that the try/catch block around this loop. The sleep() method in the Thread might throw an interruptedException. It will happen only if some other thread wanted to interrupt this sleeping one. This program just prints a message (as shown in above program) if it gets interrupted.

Notice that the output produced when thr is used as an argument to println(). This displays, in order, the name of the thread, and its priority, and then the name of its group.

By default, the name of the main thread is main.And its priority is 5, which is the default value, and main is also the name of the group of threads to which this thread belongs to.

In the above program, as you can see, sleep() causes the thread from which it is called to suspend execution for the given period of milliseconds. Its general form is :

The number of milliseconds to suspend is given in milliseconds. This method may throw an InterruptedException.

The sleep() has a second form, shown next, allows you to specify the period in terms of milliseconds and nanoseconds:

This second form of sleep() method is useful only in environments that allow timing periods as short as nanoseconds.

As the preceding program shows, you can use setName() method to set the name of a thread.

You can obtain the name of the thread by calling the method getName() (this method is not shown in the above program, but you can try it). These methods are the members of the Thread class and are declared like this :

Here, threadName specifies the name of the thread.