It returns a value of the type Thread.State which indicates the state of the thread at the time at which the call was made. State is an enumeration defined by the Thread. (An enumerations is nothing, it is a list of named constants. You will learn about enumerations in next chapter).

Here this table lists the values that can be returned by the method getState() : 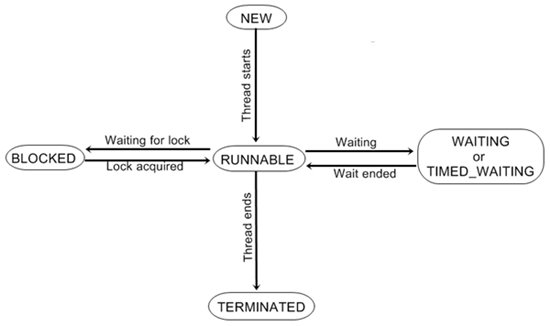 Given a Thread instance, you can use getState() method to get the state of a thread. For instance, the below sequence determines if a thread called thrd is in the RUNNABLE state at the time the getState() is called :

It is important to understand that a thread's state may change after the call to the getState(). Therefore, depending on the circumstances, the state got by calling the method getState() may not reflect the actual state of the thread only a moment later. For this reason and other reasons, the method getState() is not intended to provide a means of synchronizing threads. It is primarily uses is for debugging/profiling a thread's run-time characteristics.