Using generics, it is possible to create a single class, for instance, that automatically works with the different types of data. A class, interface, or method which operates on a parameterized type is called generic, as in generic class or generic method.

Following is a simple example of a generic class. This program defines the two classes. The first is the generic class Genrc, and the second is GenrcDemo, which uses Genrc.

The output produced by the above Java program is shown here: 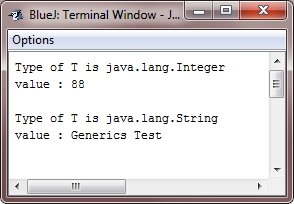 First, notice how Genrc is declared by the following line :

Here, T is the name of type parameter which is used as a placeholder for the actual type that will be passed to the Genrc whenever an object is created. Thus, T is used within Genrc when the type parameter is needed. Notice here that T is contained inside < >. This syntax can be generalized. When a type parameter is being declared, it is specified within angle brackets. Because the Genrc uses type parameter, Genrc is a generic class, which is also called a parameterized type.

Next, T is used to declare an object called obj, as shown below :

The type parameter T can also be used to specify the return type of a method, as in the case with the getobj() method, shown below :

Because obj is also of the type T, its type is compatible with the return type that specified by the method named getobj().

The showType() method displays the type of T by calling the getName() on the Class object returned by the call to the getClass() on obj. The getClass() method is defined by Object and is thus a member of class types. It returns a Class object that corresponds to the type of the class of the object on which it is called. Class defines the getName() method, which returns a string representation of the class name.

The class GenrcDemo illustrates the generic Genrc class. It first creates a version of Genrc for integers, as shown below :

Before moving on, it's necessary to state that the Java compiler doesn't actually create different versions of Genrc, or of any other generic class. Although it is helpful to think in these terms, it is not what actually happens. Instead, the compiler removes all the generic type information, replacing the necessary casts, to make your code behave as if a specific version of Genrc were created. Thus, there is truly only one Genrc version that actually exists in your program. The process of removing the generic type information is called erasure

The next line assigns to iObj, a reference to an instance of Integer version of Genrc class:

Notice here that when the Genrc constructor is called, the type argument Integer is specified also. It is because the type of object (iObj in this case) to which the reference is being assigned is of Genrc<Integer> type. Thus, the reference returned by the new operator/keyword must also be of Genrc<Integer> type. If it is not, a compile-time error will result. For example, the following assignment will cause a compile-time error :

Because iObj is of type Genrc<Integer>, it can not be used to refer to an object of Genrc<Double>. This type checking is one of the main benefits of generics as it ensures type safety.

As the comments in the program state, the assignment :

makes the use of autoboxing to encapsulate the value 88, which is an int, into an Integer. This works because Genrc<Integer> creates a constructor that takes an Integer argument. Because an Integer is expected, Java will automatically box 88 inside one. Of course, the assignment could also have been written explicitly, like:

However, there would be no benefit to using this version.

The program then display the type of obj within iObj, which is Integer.

Next, the program obtains the value of obj by the use of the following line:

Of course, it is not necessary to use the auto-unboxing feature. The preceding line could have been written like this, too:

However, the auto-unboxing feature makes the code more compact.

Because the type argument is String, String is replaced for T inside Genrc. This creates conceptually a String version of Genrc, as the remaining lines in the program demonstrate.