When the exceptions are thrown, execution in a method takes a rather abrupt, non-linear path that alters the normal flow by the method.

Depending upon the method is coded, it is even possible for an exception to cause the method to return ultimately. This could be a problem in several methods. For instance, if a method opens a file upon the entry and closes it upon the exit, then you will not want the code that closes the file to be bypassed by exception-handling mechanism. The keyword finally is designed to address this contingency.

The finally block will execute always, whether an exception is thrown or not. If an exception is thrown, the finally block will execute even if no any catch statement matches the exception. Any time a method is about to return to the caller from inside the try/catch block, through an uncaught exception or an explicit return statement, the finally clause is also executed before the method returns. This can be useful in closing the file handles and freeing up any other resources that might have been allocated at the starting of a method with the intent of disposing of them before returning.

Following is an example program that shows the three methods that exit in various ways, none without executing their finally clauses :

Below is the output generated by the above Java program : 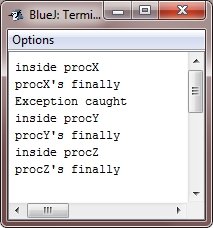