Even though the Java's built-in exceptions handle the most common errors, you will probably want to create your own exception types to manage the situations specific to your applications. This is quite easy to do:
just define a subclass of Exception (a subclass of Throwable). Your subclasses do not need to actually implement anything, it is their existence in the type system which allows you to use them as exceptions.

The first form creates an exception which has no description. And the second form lets you to specify a description of the exception.

Even though specifying a description when an exception is created is often useful, sometimes it is better to override the method toString(). As the version of the toString() method defined by the Throwable (and inherited by Exception) is first displays the name of the exception followed by colon, which is then followed by your description. By overriding the method toString(), you can prevent the exception name and colon from being displayed. This makes for the cleaner output, which is desirable in some of the cases.

Here, the following table lists the methods defined by Throwable:

Here this example program declares a new subclass of Exception and then uses the subclass to signal an error condition in a method. It overrides the method toString(), allowing a carefully plain and simple description of the exception to be displayed.

This example program defines a subclass of Exception named MyException. This subclass is preferably simple. As it has only a constructor plus an overridden the method toString() that displays the value of the exception. The class JavaProgram defines a calculate() method which throws MyException object. The exception is thrown when the calculate() method's integer parameter is greater than 10. The method main() sets up an exception handler for the MyException and, then calls the method calculate() with a valid value (less than 10) and an illegal one to show both paths by the code. Here is the output/result : 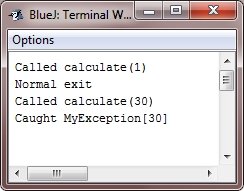