Then the output produced by the above code would be as shown below :

Thus from the above given code, it is proved that the name of an array is actually a pointer that points to the first element of the array.

Thus, to print the data value of the fourth element of array age, we can give either of the following :

Pointers also, may be arrayed like any other data type. To declare an array holding 10 int pointers, the declaration would be as follows :

Now to find the value of amt, we'll write

Similarly, assuming that all pointers in the array of pointers are pointing to a legal location, you can access the contents they are pointing to, using the following code :

Let's take a look at this C++ example program for the complete understanding on this concept.

Here is the sample run of the above C++ program 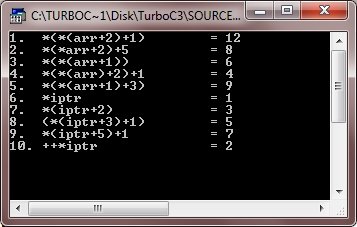 As you know that C++ treats a string as an array of characters, we are discussing the strings under arrays. A string is a one-dimensional array of characters terminated by a null ('\0'). You have learnt to work with strings in class XI. To print a string with ... in between adjacent letters, you will probably use the following code fragment :

Alternatively, the same can be achieved using a character pointer also. Consider the following code fragment :

But the above given code segments produce the same output. That is,

You are familiar with the first code segment. In the second one, the for loop in the initialization section makes cp (the char pointer) point to name (the string) and then prints the data value being pointer to by cp in each cycle of for. At the end of each cycle, the cp is incremented so that it points to the next character in the string. The loop continues as long as the cp is not pointing to null ('\0'). To print the entire string in the same line using the pointer, the loop will be as

The array of char pointers is generally preferred over two dimensional array of characters. There are two reasons behind this, which are :

Let's take a look at this C++ example program for the complete understanding on this concept.

Here is the sample output of the above C++ program 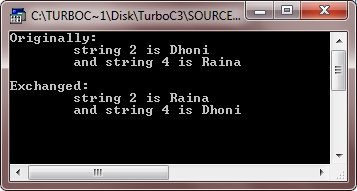